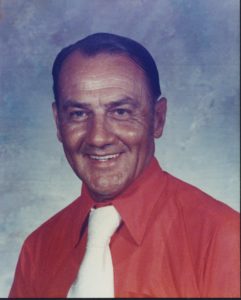 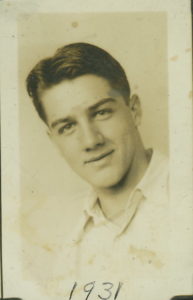 Woodrow Evans was born July 23, 1913, youngest child of Joe and Minnie Evans. The Evans family was living on a farm in Anderson County Tennessee not far from Andersonville and Big Ridge at this time. Most activities for the Evans family centered on farming and Joe’s school teaching.

Around 1919 the Evans family moved to Powell Station in Knox County Tennessee.  They moved to the corner of Sharps Road and Copeland Road.   Ethel Evans Walczyk remembers that Moss and Oscar drove the horse drawn hack that carried all their belongings between Anderson County and Powell Station. Woodrow was seven years old at this time and attending Powell School.

Minnie died in 1923 when Woody was only 9.  The family moved closer to the center of Powell on Harmon Road. 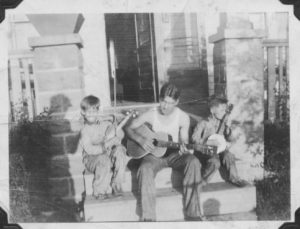 Woody and his nephews on Harmon Road

He was very active and participated in several sports. In 1930, Woodrow and his brother Moss were on the first high school football team at Powell. 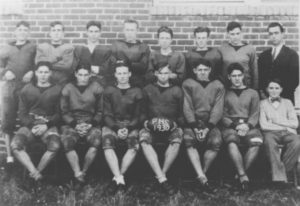 Special thanks to Cleo and Snooks Scarbro for providing the names of these men.

Woodrow’s wife Evelyn (she was known by her nickname, Red) told stories of when they were dating. Evelyn was attending Central High School which was an arch rival of Powell. During a game between Central and Powell, someone told Woody that Evelyn’s old boyfriend (who was playing on Central’s team) was going to get Woody. Wanting to get the upper hand, Woody decided that he would get the boy first. Since the boy had no idea of what was happening, Woody caught him by surprise and put him out of the game. After the game, Woody found out that the boy had nothing to do with it, so he went to the sideline to apologize. The boy was starting to regain his senses and accepted Woody’s apology.

Woody said he thought that the toughest team that they played in football.was the Tennessee School for the Deaf (TSD). He said that in the middle of a pile up, they would often get in an extra punch or kick and occasionally would bite. He said that he thought that they knew when the whistle blew to end the play, but they would take advantage of their handicap and get in an extra tackle or hit. 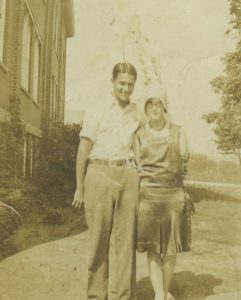 On April 23, 1932, Woody and Evelyn went to Middlesboro Kentucky to get married. Both were still in school and had to keep it a secret until after graduation.

They lived in Inskip (half way between Knoxville and Powell) near her parents George and Laura Paul. Their first three children Woody Jr., George, and Joe were born in Inskip.

Life during the depression years was difficult for the Evans family. Woodrow found labor work to support the family. Woody Jr. tells stories of the times when money was hard to come by and “Mom had to put extra water in the beans to give us bean soup to eat”.

Though times were hard, family life was good. The Evans participated in sports activities with the boys playing ball and Woodrow coaching.

In the early 1940’s, the Evans family moved to Powell, not far from where Woodrow’s father, Joe lived. Margaret, their fourth child was born while they were living here.

World War II in Europe was escalating at this time, and the economy was becoming more prosperous. Woodrow was hired at the new Government plants in Oak Ridge Tennessee. Working as a special technician, Woodrow was sworn to secrecy about his job and could not discuss it with his family or friends. The job (the subject was later declassified) involved working on project Alpha of the Manhattan District (Y-12 Plant) that produced the Atomic Bombs that were dropped on Japan. 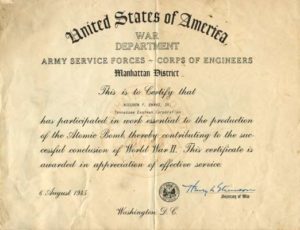 After the war in 1945, Woody was offered a position at project Beta (nuclear medicine). Woody chose to be a part of the force reduction left Oak Ridge. After terminating his employment with the Manhattan Project, he obtained a chauffeur’s driver’s license and became a truck driver.

The author remembers him telling about driving a coal truck down the narrow via duct on Church Street in downtown Knoxville. There was very little room in the traffic area since people could park their cars along the side of the road. He was about half way past one of the parked cars when the driver of that car opened the door. His door caught at the back of the truck’s cab and was torn from it’s hinges. Since the road was narrow and busy, Woody drove the truck to the end of the via duct and parked. When he got back to the scene of the accident, the police were already there. Although it was evident that the driver had opened the door at the wrong time, Woody was given a traffic ticked anyway.

Hauling coal took it’s toll on Woody. He injured his lower back and had to take less physical jobs. He got a job with the Nabisco Company driving a delivery truck but he was discouraged by the hard labor with low pay, Woody decided that he was through working for other people and the only way to get ahead was to work for yourself. In the late 1940’s, he started a door to door dry cleaning delivery service. The business was so successful that by 1948, he was able to build a building and start his own dry cleaning company. He was proud of the fact that he no longer had to use someone else’s dry cleaning facility. He adopted the motto “We Operate Our Own Plant”. 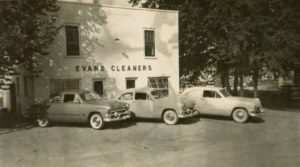 The building was built at the corner of Brickyard Road and Emory Road in Powell Tennessee. The structure was built by Frank Chandler with the help of his sons, John & Melvin along with Jay Lewis and Gene Hicks. Gene remembers that Frank kept them busy mixing cement and digging the hole for the septic tank.

When the structure was completed, the Evans family moved. The move took place while the children were in school. Apparently they forgot to tell Joe (who was about 7 years old) to walk home to the Cleaners building instead of the old house. When he got home, the house was empty. Confused about what had happened, the just sat down and waited for them to come home. Later when the family realized what had happened, they brought him to the new building. Jokingly, he accuses them of moving and leaving him on purpose.

The building was a two story structure with an apartment for the family on the second floor. Woody and Evelyn’s fifth and sixth children, the author (Ronny) and Charlotte, were born while the family lived here. 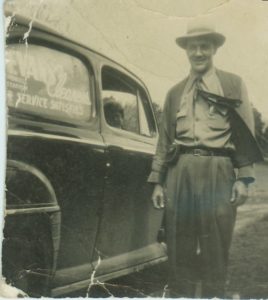 Evans Cleaners was a family project with Woody, Evelyn, and the kids sharing the responsibilities. Woodrow operated the cleaning machinery, Evelyn handled the bookkeeping and the office work and Woody Jr.(who was called “little Woody”) and George operated the delivery routes. Woody Jr. would tell stories of loading the stoker with coal in the mornings and then going to school.

As Joe and Margaret grew, they also helped by operating the clothes presses, delivering cleaning, and other responsibilities. In 1957 Evelyn’s father George Paul passed away. Concerned about the welfare of her aging Mother, Woodrow and Evelyn in 1962, purchased a lot and built a house beside hers to be close in case she needed them.

Through the 1950’s and 1960’s life prospered for the Evans family and Evans Cleaners. By the 1964 the four older children were married and Woodrow and Evelyn had seven grand children. The older children were still helping with the operation of Evans Cleaners but their interests and goals were starting to go in different directions. Ronny and Charlotte were starting to help though they were still very young. 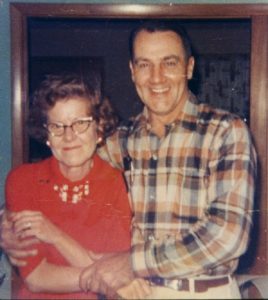 In 1968 Evelyn became seriously ill from cancer. All the family’s efforts went to providing comfort and caring for her medically. Her condition continually declined and in January 1969 she passed away.

At the end of 1969, Woodrow married Lorene Yeary. This marriage lasted only a few months due to conflicts between the children of the two families.

For the next two years Woodrow was content to concentrate on the operation of his business. He sold the his property on the corner of Emory Road and Brickyard Road and moved his Dry Cleaning equipment a block down Emory Road to the Powell Coin Laundry, which he purchased in 1971. All of his children had gone to pursue their own goals and provide for their own families except the author, who had joined the Air Force and Charlotte who had married Steve Curry and was helping Woodrow operate the businesses.

Woodrow was a good practical joker and one incident is recalled by his daughter, Charlotte Evans Curry. One Christmas, Woodrow and Charlotte were going to drive to Atlanta, Ga. to spend the holiday with Woodrow’s other daughter, Margaret Evans Weaver. They left very early Christmas morning and arrived in Atlanta around breakfast time. They stopped at a pay phone a block away from Margaret’s house and called to tell Margaret that they would not be able to make the trip. Woodrow’s story was very convincing and Margaret, very disappointed, said that she understood and would miss seeing them. When Woodrow got back in the car, Charlotte said that he was excited and in a hurry to pull the prank. They reached Margaret’s house a minute or so later, pulled into the driveway, and walked into the house. Margaret, who was fixing breakfast, finally saw them and realized that he had pulled a joke on her. They had a very good Christmas together.

Woodrow started driving his own dry cleaning delivery route at this time. He was very fond of children, and would stop at neighborhood stores and buy “sour orange” chewing gum or chewy candy for the children who lived on his delivery route. He would pull into a neighborhood, and you would see children running for blocks to get their treat. I guess that this was also good advertising for Woodrow, because he got several customers from this activity.

In August of 1972, Joe Evans, Woodrow’s aging father, passed away at the age of 92. In early September, Woodrow married his third wife, Alma Haggy. It was during this time when Woodrow’s health became questionable. He was diagnosed as having cancer of the lung. January 3, 1974 Woodrow passed away at the East Tennessee Chest Hospital in Knox County Tennessee. He was buried beside Evelyn at the Tennessee Valley Memory Gardens in Anderson County. His presence is missed, and he is remembered by all with pleasant thoughts.