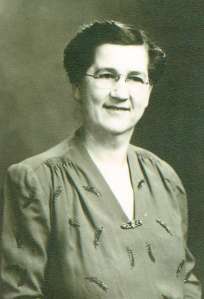 Robert Lee Evans was born May 3, 1889 in Anderson County, Tennessee. He was the youngest son of Solomon Peter and Margaret Ann Underwood Evans. Both his parents were teacher’s. They also farmed their land where Lee, as he was called by his mother, grew into a young man doing all the things on the farm that other boy’s did in that era. He had many memories of his childhood. The one in particular he talked about, was when as a small boy how his mother would put him on her lap and read the Bible to him.

There were nine children in the family though twins John Andrew and Maudie Bell died at birth. Etta was the first child William Thomas was the second and he was twelve years older than my father and my father would go to him for advice. The third was Joseph Franklin. Then the twins were fourth and fifth. Ernest Evans was sixth and seventh was Sarah Louisa (Sallie). Eighth was Robert Lee and ninth was Ida Lourina.

By the time my father was seventeen he had lost his mother and brother Ernest. His favorite sister, Ida, had pneumonia at age twenty one that took her life. So at twenty three my father knew all about grief and sadness.

After finishing his formal education, at seventeen, he decided he wanted to travel before going to college. He and a friend worked their way to California doing any kind of work they could find. He told me it was on this trip that a ‘defining moment’ happened in his life. He was working in a grocery store when the owner told him he was to overweigh the produce. He was shocked when this happened. This dishonest merchant made such a profound impact on him it “defined” the rest of his life. He said he knew right then his life would never be the same. He was certainly an honest man in all aspects of his life.

The one regret he had in taking this trip which lasted almost a year, was that his mother died and he was not at home and that he did not get home for her funeral. A regret he carried the rest of his life. I recall as a young girl, a mother’s day sermon when he spoke of his own mother his eye’s filling with tears.

It was 1907 when he returned home from his long trip. He was eighteen by this time. He stayed at home and worked to save money for college. It was around 1911 1912 he made the decision to enter Hiawassee College. It was a Methodist college in Sweetwater, Tennessee. While he was in college he lived with his older brother Thomas and his family. A long time friend of his told me his father wanted him to be a lawyer and therefore he would not help him with college expenses. He felt the call into the ministry following his older brother, Thomas. He did study law and won the debate spoken at the Eroaletheon open annual meeting held at Hiawassee College April 5, 1913. He graduated from Hiawassee College in 1914 and was Valedictorian of his class.

Soon after graduating he was ordained into the Holston conference of the Methodist church. His first charge in 1914 was Wheat, now Oak Ridge, Tennessee. The church is still standing. His long time friend told me how she and her sister’s would fix their hair and put on fresh apron’s when they saw their handsome young minister coming down the country road for a pastor’s visit.

It was at Wheat that he met his future wife, Blanche Bradley a teacher, who came to the church with a friend who had come to fill in for the pianist. The inscription in his Bible is “To Lee from Blanche, December 1914.” They were married August 1, 1916. They went to the Methodist retreat, Lake Junaluska, North Carolina on their honeymoon. 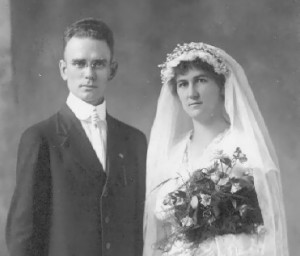 By 1917 he had been called to Coal Creek, Tennessee. The country was in the midst of the influenza epidemic. My father contracted influenza and said while he was in the hospital one funeral after the other passed by his window. In December 1917 he lost his first daughter, Dorothy Lynn, who was born December 7, 1917 and died December 17, 1917. In early January of 1918 his father died.

My earliest memories of my father are being with him as a five year old. I would go wherever he would take me, often to funerals and cemeteries or when he would make a call on the church member’s. Often there would be sickness or tragedies and I would wait for him in the car. When he returned I would always have a question or two. He would have the right answer for me. When I was a bit older he would take me to a quiet place to study and on a rare occasion, when he would take an hour or two for himself, he would take me to a baseball game. I learned a great deal about my father during these times. He answered my questions with such wisdom I have never forgotten his answer’s. I recall asking him why he did not wear a robe in the pulpit. His answer was and I quote “honey, the robe does not matter, it is how I live that matters.”

He was a devout man. On another occasion I ask him how he felt when he was in the pulpit preaching and again I quote “I have never stepped into the pulpit that my knees do not tremble.” Once when we were talking about the Bible he said he knew the Bible from memory but he always read his text from the Bible, saying, “he would not want anyone to think he might be showing off.”

Although he suffered all of his adult life with asthma, often gasping for a good breath of air, he complained very little and accepted his affliction with grace.

He was a brave, wise man of faith, who never under any circumstance compromised Christ regardless of the consequences. He was a praying man who would always kneel for the prayer when in the pulpit. He was a sensitive man who liked people and was always concerned for their spiritual needs. He was a quiet man who was always concerned for his own family. He was a private, humble man who spoke very little about himself. He was a man who, without a doubt, had “the peace that passeth all understanding.” He was the man I called ‘Daddy’ whose faith never wavered and who has been the inspiration of my life.