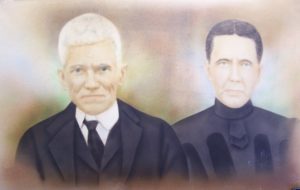 Peter Evans was born June 13, 1847 in Buncombe County, North Carolina. He was the eldest son of William A. and Mary Evans. His brothers and sisters were Jim, Martha, Tom, Radie and Andrew.

Very little information is known about Peter’s childhood years. Documents from U.S. Federal Records have been found regarding his military service in the Confederate Army. On October 18, 1862, he enlisted in Company C, 26 Tennessee Infantry by Captain Ed Allen at Taylorsburg in Cocke County Tennessee.

Family stories tell that Peter was an excellent horseman and that on one occasion he rode in battle through the Union line. It is also said that he served as a spy for the South. He pretended to be a deaf and dumb tramp so that he could move freely around the Union Troops. It is said that he was tested by the Union troops to prove that he was really deaf by firing a rifle next to his ear to see if he would flinch. If the story is true, he apparently played his role very well.

His military records show that he was admitted to St. Mary’s Hospital in Dalton Ga. by P. H. Wright, Ast. Surgeon of the 26 Tennessee Infantry. He was diagnosed as having Typhoid Fever. On June 17, 1863, he was transferred to the General Hospital at Tunnell Hill Ga. These records place him around the famous battles of Chickamauga and Lookout Mountain.

After the War he returned to East Tennessee. Records have been destroyed by fires, but his next place in history is documented by his oldest grandchild, Vida Demarcus Jenkins. She tells that Peter met his wife-to-be at Carson-Newman College in Jefferson County Tennessee. He was attending Carson College and she was attending Newman College. When the two colleges combined, there was a social gathering. Peter told Vida that when he first saw Maggie (Underwood) he said, “This is the girl I am going to marry”.

They lived in Strawberry Plains Tennessee for the first part of their marriage. (I have not found proof, but I assume that they lived on her father’s farm). Peter spent his time farming the land around Strawberry Plains. Vida Jenkins said that he told her he had to take the ferry across the Holston River to get from the house to the farmland. His first three children, Etta, Tom and Joe were born here.

They moved to Anderson County Tennessee around 1880. Ernest, Sallie, Lee and Ida were born here. John Andrew and Maudie Bell, two other children of Peter and Maggie, died in infancy.

Peter had many activities in Anderson County and near-by Union County (Peter’s farm house was in Anderson county, but his barn which was a stone’s throw away, was in Union County). He spent most of his time being a farmer, a school teacher and a father. Winnie McDonald in her book “Our Union County Heritage” listed S. P. Evans as a Justice of the Peace in Union County in 1883. The book “Anderson County History” by Hoskins, references “The Coal Creek Coal Company” organized in 1887 by E. C. Camp, S. P. Evans, Charles McKarsie, and E. M. Camp (the Coal Creek community was later renamed to Lake City after the flooding of Norris Dam).

Neagil Turner tells a family story about when Peter was a teacher. It seems that a rough community in Union County had run all the school teachers away. Peter was asked to take over and organize the school. It is said that he gathered all the people in the community together. He told them that if they had a problem with him, now is the time to take care of it. The story says that there were no objections and that he taught there without incident.

Of course, all stories have several versions. I also heard this same story stated the following way:

The community was notorious for chasing the school teachers away. Peter had heard the rumors that they were going to chase him away and was ready for the confrontation. The men arrived at the school house early intending to block the door and not let Peter in. They didn’t realize that Peter had gotten to the school house earlier and was hiding in the rafters. When the men barred the door, Peter jumped out of the rafters and used a large board to “convince” the men that he should stay on as teacher.

During the first two decades of the twentieth century, Peter had several tragedies occur in his life. On November 26, 1908, Ernest, (Peter’s son), died. Death records are not available from that period but family stories tell of Ernest committing suicide after being rejected by a lover.

Peter’s Daughter, Ida died on August 12, 1912. Ida was a school teacher, and it is said that she was a very pretty girl.

On July 31, 1908, Maggie passed away. I have found no records indicating the cause of her death.

Ernest, Maggie and Ida were all buried at Loyston Cemetery in Union County Tennessee.

Peter moved to the Powell community in Knox County around 1920. His son Joe and his daughter Sallie lived close by. Peter’s granddaughter, Blannie Demarcus Cornwell remembered visiting her grandfather when she was young. She said that they would take the train from Kentucky to Knoxville and he would meet them in a horse drawn surry. She said that Peter always played with her and would tickle her arms with his whiskers. She also remembered that he had a pie safe and it would always be filled with pies when they visited. 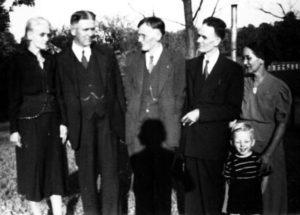 An article was placed in the Powell Station section of the January 6, 1918 issue of the Knoxville Journal and Tribune news paper. ” ‘Daddy’ Evans is seriously ill at the home of this daughter Mrs. Jim Turner.” The article had been printed two days after Peter died, January 4, 1918. Vida Jenkins remembers that he returned home (not far from Sally’s house) and died in his sleep. His body was discovered the next day. He was buried on a cold and snowy day in the Loyston Cemetery in Union County. The graves were moved by the Tennessee Valley Authority in the 1930’s to New Loyston Cemetery when they were preparing to flood the valley with Norris Dam. 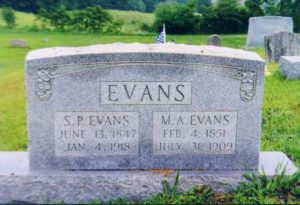